Read more about the life story of Peggy and share your memory.

“We can’t fully appreciate joyful reunions later without tearful separations now. The only way to take sorrow out of death is to take love out of life.” –Russell M. Nelson

Peggy Ann Godfrey Rasmussen returned to the loving arms of her Heavenly Father and reunited with many of those she loved on November 1, 2022. She was 85 years old.

Peggy’s life has been one full of love, of compassion, of hard work, and of laughter. Born September 26, 1937, in Cody, she was the fifth child of Ernest Edward (Butch) and Jessie Mortensen Godfrey. She spent much of her childhood on horseback, riding out for hours with her brother Pat (Eugene) before returning home to enjoy slices of her mother’s homemade bread slathered with warm butter

She attended school first in Cowley, then in Ten Sleep, and then again in Cowley. She especially enjoyed her history classes and her English courses, which created a lifelong love of literature and poetry.

It was while attending high school in Cowley that she reconnected with Frank Simmons Rasmussen after first meeting in Ten Sleep. Despite an 11-year age difference, the couple hit it off, spending their courtship square dancing, watching movies, and writing letters to each other. Peggy compressed two years of school into one so that she could satisfy her parents’ one precondition to marry Frank immediately after graduation. (Although things worked out for the couple, she firmly advised later generations that they should most certainly NOT follow in her footsteps.)

Peggy was a hard worker her entire life, from driving beet truck and stacking hay bales to herding cattle, delivering mail for the US Postal Service for a quarter century, quilting and sewing, or raising 4 children. There was rarely an Easter, Thanksgiving, or Christmas dinner that she didn’t host—and the 4th of July parties on the farm often had friends, family, and neighbors eating grilled food and shooting off fireworks until well after midnight. Later in life, she would prepare innumerable pans of “funeral potatoes” and cook hams whenever the need arose - often served after she delivered the life history at the funeral.

She was someone who believed in serving her community. She was on the Cemetery Board for 54 years, as well as the Town Council, Pioneer Day Committee, Museum Board, and Beautification Committee.

Most know that Peggy was funny and loved to laugh, making her the perfect partner for Lila Steed as the two emceed Pioneer Day programs for 31 years. Her love of books led to her being chosen to lead a book club that met regularly for some 25 years. She loved writing, and in addition to poetry and life stories, she wrote countless roadshows and plays. But most of all, she loved people—especially her family—and was “Grandma Peggy” to many to whom she was not actually related. Her hugs were free and frequent.

Peggy was a faithful member of the Church of Jesus Christ of Latter-day Saints who loved her Father in Heaven and her Savior, Jesus Christ. Although Frank passed away in 1998 after 44 years of marriage, she took great comfort in knowing that they had been sealed for time and all eternity on November 19, 1982, in the Jordan River, Utah temple. She served in many callings, including Primary President, Relief Society President, and Young Women’s President. She was part of the Singing Mothers in the 1960s and 1970s and sang in the ward choir for 50 years.

Peggy is preceded in death by her granddaughter Charly, her husband, her parents, and her siblings Edward, Marjorie, and Lynnette.

Funeral services will be held on Saturday, November 5, 2022, at 2:00 p.m. at the Church of Jesus Christ of Latter-day Saints in Cowley. A viewing will be held at the church one hour before the service. Interment will be at the Cowley Cemetery.

“There are no true endings. Only everlasting beginnings.” --Dieter F. Uchtdorf.

As a family, we thank those who called or stopped by, or sent loving cards, letters, flowers, and messages to Mom over the last weeks of her life. You made a very difficult time easier for her—and us. Our thanks also go to Dr. Troy Caldwell and to the team of medical professionals at Stillwater Hospice for the professional, tender care you delivered.

To send flowers to the family or plant a tree in memory of Peggy Ann (Godfrey) Rasmussen, please visit our floral store. 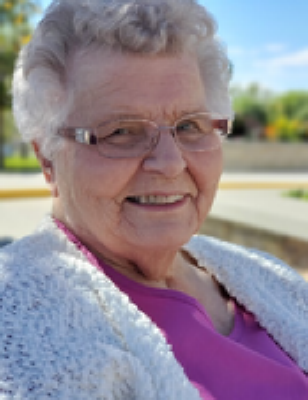